For many of us, the idea of the Tooth Fairy brings all sorts of pleasant memories. Who didn’t love waking up to some money left by a fairy who only wanted our baby tooth in return?

For many kids, a visit from the Tooth Fairy is and was also a right of passage. It meant transitioning from being a little kid to being a “big kid.” It can be a joy for parents as well, as they watch their kids’ excitement.

A visit from the Tooth Fairy can also be a good excuse to talk about care for your child’s mouth. The adult teeth that are replacing their baby teeth will be with them throughout their lives, so they need to learn how to take care of them!

Where Did the Tooth Fairy Idea Come From?

Some sources trace back the practice of a child receiving a gift for a tooth back to the Middle Ages. It seems to have been big in northern countries, particularly England, Norway, Finland, and Sweden. Often this gift was a “tand-fé”—literally, a tooth fee.

The idea of an actual fairy came much later, however. The earliest reference to the Tooth Fairy appears in the “Household Hints” column of the Chicago Daily Tribune back in 1908. It’s suggested as a way to get kids who are hesitant to lose their teeth to finally allow the tooth to be removed.

Tips and Ideas for a Positive Tooth Fairy Experience

There’s some childhood magic in the idea of the Tooth Fairy. And while some parents like to make a big deal out of the tradition, it does not really require a huge amount of time and effort to make this a positive experience.

More important than the tradition, parents should use this as time to talk to their kids about the care of their teeth. The key is not to lecture your children but to take advantage of their attention to their teeth, along with their natural curiosity.

Decide ahead of time what you will do. How much will the Tooth Fairy give? (See below.) Who will make the exchange? Mom or Dad or someone else?

Have some answers ready for your children. Children naturally ask questions, and nothing provokes their curiosity like a mythical being that hands out money! Some of those questions will put you on the spot. Common ones are:

You don’t have to answer all of your child’s questions. And you will have to decide for yourself how comfortable you are with telling your child the truth.

It can also be fun to read the American Dental Association’s “Ask the Tooth Fairy.” It’s written in an interview format and answers many of the questions children have.

Dispose of the tooth. Some parents like to hang onto their child’s baby teeth. This is a personal choice, of course. But if the tooth is in the house, there is always a chance your child will discover it before you are ready to “break the spell” of the Tooth Fairy myth. So you have our permission: It’s OK to throw that tooth away.

Keep it simple. We’ve heard stories of parents that go overboard with the Tooth Fairy experience: Leaving little glitter footprints in the house, writing long letters, or even having the child write a letter to the Tooth Fairy. Again, how you keep the tradition alive is a personal decision. But parents report that they, and the child, get the most out of the experience when it is kept simple. Don’t let creative-sounding ideas get in the way of the fun and magic of the moment.

How Much Should the Tooth Fairy Leave?

The amount that parents leave varies a lot. A 2013 survey by Visa found that American children receive, on average, about $3.70. But that average reflects a wide range: Some children receive $5 or more, while some get only a few quarters (under a dollar). The amount seems to vary by the family’s economic situation, area of the country, and other factors.

So what’s reasonable to leave? These days, a dollar or two seems in order. But if you want to be sure, there is actually a Tooth Fairy Calculator app you can download to find the right amount given your income and area of the country. (Just be sure to put in your age, not your child’s.)

If you don’t want to download the app, you can use the free online version. 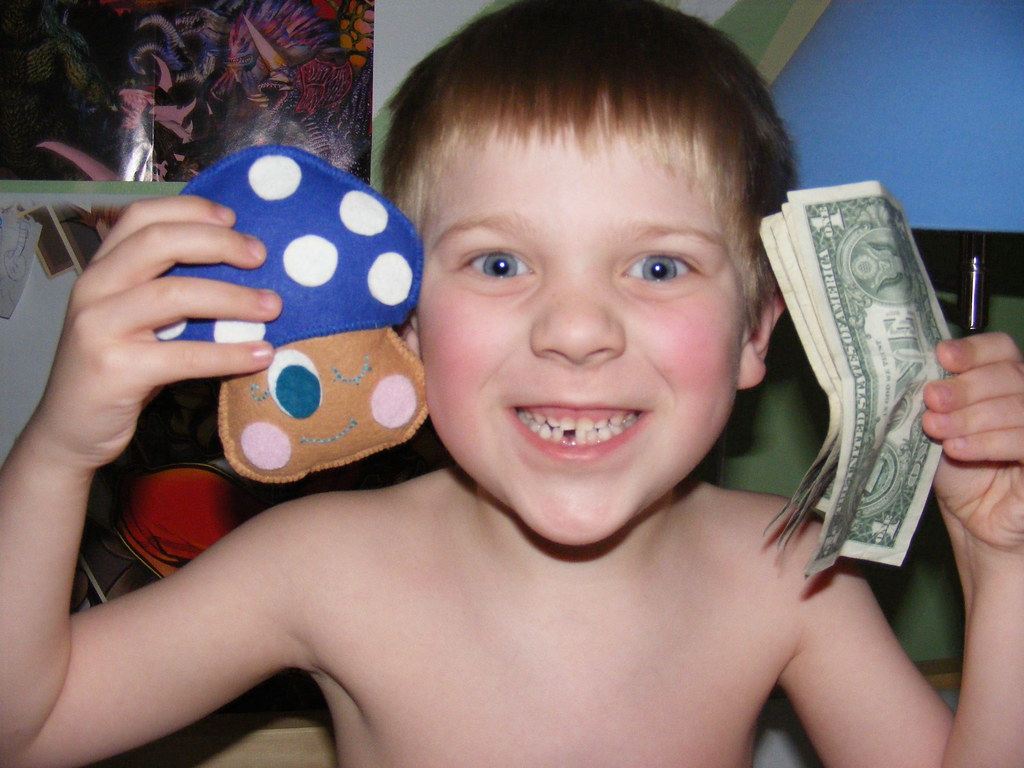 What Are Those Tooth Fairy Pillows?

Tooth Fairy pillows have been around for decades, but they seem to have really caught on in the past few years. As the name suggests, a Tooth Fairy pillow is a small pillow with a pocket where the child can put his or her tooth. (The pocket often has a small cloth or napkin as well, for wrapping up the tooth.) The Tooth Fairy—a.k.a. the parents—then take the tooth and leave the money in the pillow.

Tooth Fairy pillows make playing the role of the Tooth Fairy easier, because parents don’t have to fish around their child’s bed, pillow, and/or nightstand to find a tooth or leave the money.

There are several Tooth Fairy pillows available for sale these days, but it can be fun to make one as well. Young children often get one as a gift from a family member just before or after losing their first tooth.

Another alternative to a pillow is having a “tooth dish.” The child leaves the tooth in a small dish by the bed, maybe with a note for the Tooth Fairy. The money is then left in the dish. Again, the idea is to draw attention to the story of the Tooth Fairy while making the actual exchange easier for the parents.

Kids love hotlines and email addresses for their favorite holiday characters. And while Santa Claus and the Easter Bunny have been favorites, children also love leaving a message for the Tooth Fairy.

These days, many app makers have jumped in to provide just this. For example, the Google Play store has an app for calling or texting the Tooth Fairy. There is an iOS version as well. Amazon also has an app for its Kindle series, though this seems to be more limited.

Texting is a great way to communicate with kids about the Tooth Fairy. Again, kids will have questions, and what better way to answer them than through a text “from” the Queen of Teeth herself!

If you try something that works, please let us know! In the meantime, Happy National Tooth Fairy Day!

A visit from the Tooth Fairy is a fun way for children and parents to celebrate the milestone of losing...

Can Adults Get Dental Sealants?

Dental sealants are a safe and effective way to prevent cavities for kids. But are they just for kids? After...

Finding the Best Dentist for Kids Near You

Finding the best dentist for kids and teens can sometimes be tough. Obviously, internet searches and word of mouth are...

Should You Put Sealants on Baby Teeth?

It is natural for parents to want what is best for their kids, and that includes their dental health. To...